Capturing Ideas for Your Podcast or Blog

Ideas & How To Capture Them

Earlier today I had an idea for (what I thought would be) a killer blog post...then the telephone rang. I assisted the client with their questions and I hung up the phone. I realized that I hadn’t notated my “brilliant” idea and alas, it was gone. I’m guessing that I’m not the only one who has experienced this. So I decided to share this experience with you and let my failure be a lesson for you.

You never know when that brilliant idea will come and you want to be able to capture it immediately. You suddenly get inspiration for the perfect topic for an upcoming podcast episode or an idea for someone who’d make a splendid guest for a future show. Or as in my case, you get inspiration for the next blog post. I can’t even begin to enumerate the times when completely unexpectedly and without any warning, an idea pops into my head. I’ve learned (or at least I thought I had until today) to always keep pen and paper (or the digital equivalent) with me at all times to arrest that thought before it escapes.

I have been using an application on Android called Catch for quite some time now. I really like this app and all the functionality it has. It allows you to save “notes” in various formats. You can type a quick text note, snap a photo, and even record a voice memo. On Android, you can even add shortcuts to your home screen that will open the app directly into a new note for the times when you really need to save that idea quickly. (I don’t have an iOS device to verify this functionality on that operating system.) Another awesome feature of Catch is that you can access all of your notes right in your browser at catch.com. 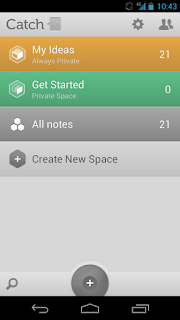 I know that many people also really like the Evernote application as well. I believe it has many of the same features as Catch does. I’ve tried both and just gravitated toward Catch, but I think it’s just a matter of personal preference. Either one will accomplish our goal of idea-saving so try them both and see which you prefer. 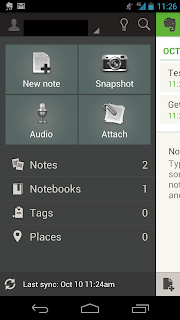 Of course you should never discount the value of good, old-fashioned pen and paper. I find that sometimes when I just want to capture an idea quickly so I can move on with the task at hand, that it’s easiest to reach for the Post-It notes. It’s less distracting to simply jot down the thought on paper than to grab the phone, launch an application, and make a note. Technology is fabulous, but in some instances the age-old method may be best.

Now keep in mind that these tool recommendations are simply to help you retain an idea for future reference, not for writing up an entire outline or article. These tools are perfect for notating a partial or unformulated idea when it comes to you, lest it evaporate as quickly as it arrived. For fleshing out or outlining full-fledged podcast episodes or blog posts I’d recommend Google Drive.

I hope these tips have been helpful to you. Have you had an experience similar to mine? If so, what steps did you take to ensure that it didn’t happen again and what tools did you use? Leave a comment below and let me know.
Email Post
Labels: Android Google podcasting smartphone apps technology