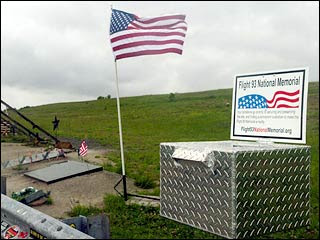 This is a donation box that Mike Svonavec, the owner of the land where Flight 93 crashed on 9-11, has put up so that visitors to the crash site can donate money to cover his costs for security for this section of land. Family members of those who were on Flight 93 are enraged, saying that Mr. Svonavec's donation box is an insult to the memory of their family. Some vistors have placed money in the box only to find out later that the money goes to Mr. Svonavec. They were under the impression that the funds were going to the memorial fund.
It has also been reported that Mr. Svonavec has requested the sum of 10 million dollars for the land that the National Park Service is trying to acquire for the purpose of building a memorial. Mr. Svonavec has denied the claim that he asked for that figure. According to Families of Flight 93, a group that represents the crew and passengers of Flight 93, the land is worth approximately $500,000. If these reports are accurate, it is my opinion that it is wrong of him to expect such a sum. Why be exploitative of this tragedy?
Photo courtesy of Guy Wathen, Tribune-Review / AP
Photo Source: AOL News
Email Post