How To Beat Your Friends At Wordfeud (or Words With Friends) 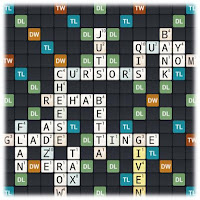 Do you enjoy playing the various crossword style word games on your mobile device? So do I! Now I don’t claim to be the best player who has ever lived, but I do want to share a few tips that I have learned that will help your game skills increase. But first, a little background…

I started playing the original board game of Scrabble almost 20 years ago with my dad and grandpa and I was hooked! Several years after that, I picked up the PC software version of the game and began playing against opponents from around the world.

When I discovered the Wordfeud application for my Android smartphone over a year ago I began inviting all my friends. Soon it wasn’t uncommon for me to have 10-15 games going simultaneously. I personally prefer the Wordfeud app, but I know that others prefer Words With Friends or the official Scrabble applications. No matter which version of the game you like best, you can take the following tips and apply them to your game today.

·         First of all let me say that I do not and have not ever used any of the various “help” apps that can be found in the respective marketplaces and on the internet. In my opinion, that is outright cheating. But to each his own.

·         The trick is to try to create a word that will not only connect with a word on the board, but will also make more than one word. In other words, (no pun intended) you want to use the tiles to create multiple words (horizontally and vertically) if at all possible. And of course, utilize the bonus spaces whenever you can. (The word "tax" in the screenshot above is an example of this. The X tile also forms the word "ox".)

·         Another tip is to try to build words that allow you to use higher scoring letter tiles (like W, H, P, Z, Q) on the bonus spaces. (Again, the word "tax" in the screenshot above is a good example. The X tile lands on a Triple Letter space.)

·         Notice that I say “try” and “if possible”. There are going to be some times that you just can’t play a high scoring word due to the board layout or lousy tiles in your rack, but most of the time you can play at least a 20-point word.

·         Play with other players that are better than you. For several months now, I have been playing with Grant Barrett, host of the public radio show, A Way With Words. He is a great opponent and I have learned a lot by playing against him. And yes, he beats me almost every time.

·         One more thing to keep in mind is that a long word does not necessarily mean a high scoring word. Sometimes the little short words are the best plays; especially when you get down to the end of the game. (Take the word "ox" in the screenshot above as an example. A small word at only two letters long, but the X tile is worth 8 points and it landed on a Triple Letter bonus space.)

Hopefully this helps you get better. And if you want to play me, look me up on Wordfeud. My username is jonnydollar.